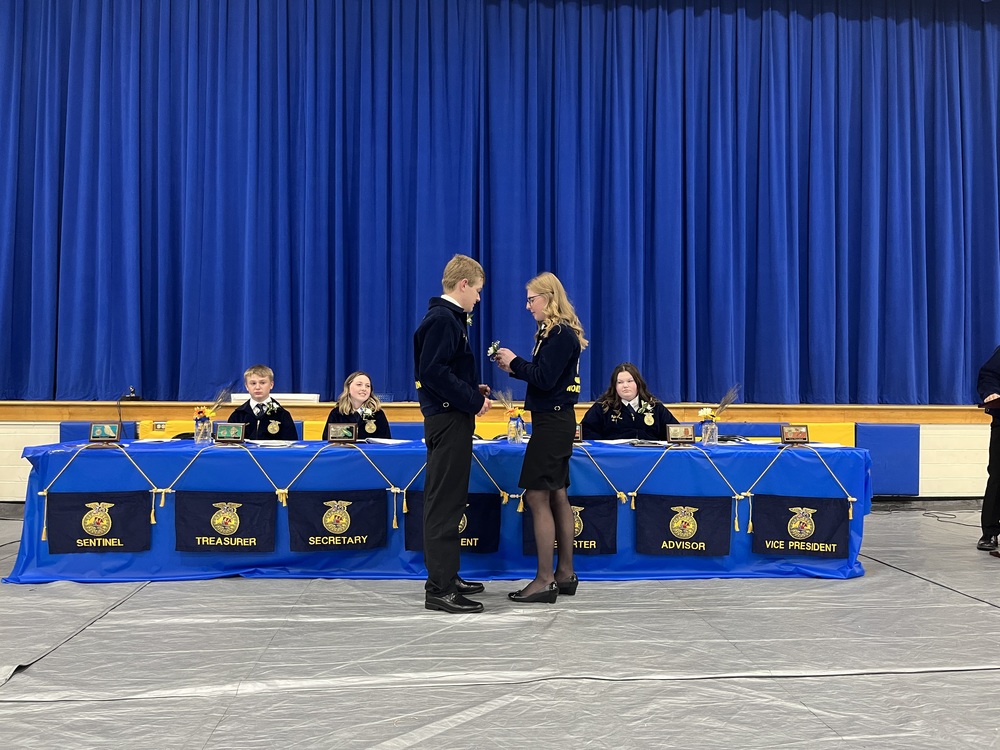 Will Mathews’s first declaration as president of Clermont Northeastern High School’s FFA chapter – more of a request, actually – was met with an awkward silence.

Mathews adjourned the group’s April 28 banquet (which technically was a meeting) and then reminded members they were to stay and clean up the high school gymnasium. After a moment or two, he added “Please?”

The humorous exchange capped the celebration of another successful school year for CNE’s FFA (Future Farmers of America) chapter, which numbers approximately 80 members, many of whom were recognized or honored during the banquet. Shelby Williams, the school’s interim agriculture education teacher and long-term sub, organized the event. She replaced David Jelley, who retired in February, and brings a lifelong background to the job.

“I’ve grown up at ag. I've been showing since I was 3. I went to school for ag education and animal science. And I have been in a classroom for the past four years at some point in time,” Williams, an East Clinton High School graduate, said.

One of Williams’s first projects was preparing members for a livestock judging competition at the Ohio Exposition Center and State Fairgrounds in Columbus earlier this year. This was the first such competition for CNE students. Students judged classes of market cattle, sheep, goats and pigs. Williams said “they did pretty well.”

“They took away a lot of different livestock evaluation terms. There's a couple of scenarios where they had to decide whether they wanted to keep certain cattle or cull some … depending on their breeding traits and the scenario that it gave them,” Williams said.

“We did lots of practices during the day at lunch. And then we prepared on the bus ride up. Most of them have somewhat on a livestock background.”

The biggest challenge, Williams said, was understanding the difference between breeding class judging and market class judging. “They're practically the exact opposite. So if you look at a class and you judge it based on breeding traits, and it was a market class, you're going to flip flop everything in the opposite.”

Sophomore Braydin Pride, who was installed as the treasurer for 2022-2023, explained the difference.

FFA members missed that kind of hands-on experience for the better part of the last two years, because of COVID-related restrictions. “It’s so important to be able to do the hands-on activities because without it, it just wouldn't be ag,” Williams said.

Members also value the relationships engendered by the group. Makayla Blankenship, the group’s new reporter, said she joined” because of the people and experiences that I've made and everybody else told me that it would be really fun to join.” She plans to show pigs at the Clermont County Fair this summer.

Pride referred to the “teamwork” among members.

“The one thing I like about FFA is like the way we do things, how we all do it as a group and how we all work together, and just the way everybody works together and we're all there for each other,” Pride said. ‘It's just really nice having somebody that has your back all the time.”

Mathews, a sophomore, took the gavel from senior Hannah Heller. He said he has had a passion for agriculture for his whole life.

“It's kind of my thing, so it's just another thing that makes you a better person in my mind,” he said. Mathews plans to pursue a career in the industry after high school. He was one of the CNE members who attended the national convention in Indianapolis last fall.

Sophomore Rylie Pence joined because she loves working with animals, particularly goats. “I love my animals. I love livestock. But then I just love the opportunities that happen,” she said.

(Awarded to ninth grade or older members who learn about the FFA history, mission, creed and emblem and make plans for a supervised agricultural experience.)

(Awarded to members in 10th-grade or higher who are involved in chapter activities and community service and complete the minimum hours of instruction and SAE project growth.)