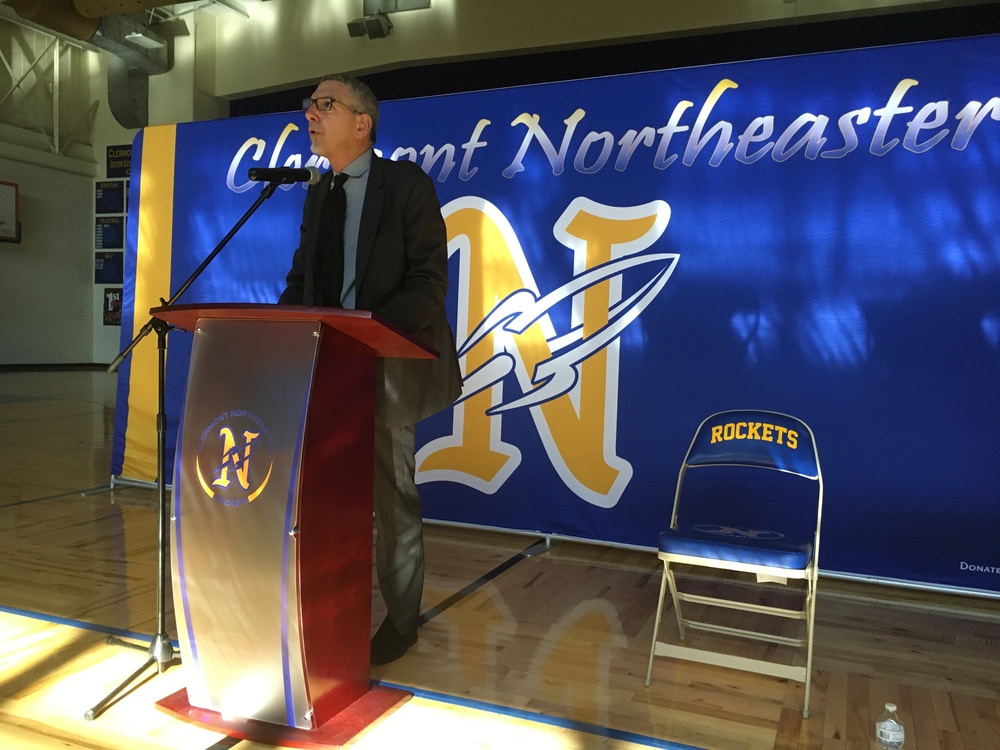 Bernadette Wayne had to keep reminding herself that what she was hearing was, in fact, real.

The Clermont Northeastern High School English teacher was listening to the book “Just Mercy” in her car, preparing to lead discussions in the high school.

“I had told my students several times, I listened to it on Audible first while I was driving, and several times I had to remind myself that this a non-fiction book, that these actually happened, and they actually happened so recently,” she said. The events in the book did happen, and have sparked conversation throughout the school and led to a presentation by the Ohio Innocence Project April 30.

“Just Mercy: Story of Justice and Redemption,” by Bryan Stevenson, is a best-selling book that has been adapted into a movie. Stevenson writes about his career working for disadvantaged clients, specifically for Walter McMillian, who was wrongfully convicted of murder in 1988 and sentenced to death in Alabama. He was on death row for six years before his conviction was overturned.

All CNE High School students and staff are reading the book as part of the school’s Comprehensive State Literacy Grant program, which it was awarded last summer. Wayne said the book was chosen because its subject could be integrated into several areas of study. The science department, for instance, could focus on the forensics aspect and the social studies department could look into the relevant laws and amendments surrounding the case.

Students were given an extra copy of the book to take home and share with their families.

“Our family engagement coordinator, Courtney Fox, is hosting questions weekly that families can discuss at home around the book, so it’s a really neat way to not only bring all grades together, all content areas together, have a meaningful conversation, but also have parents and families feel connected to their students’ learning, especially at such a critical age when a lot of times you ask high school students, ‘What did you do at school?’ you don’t get much of an answer, and now they’re having real conversations around it,” Wayne said.

To further illuminate the point of the book, the school hosted Pierce Reed, a program director and policy coordinator and systems liaison for the Ohio Innocence Project at the University of Cincinnati. The Ohio Innocence Project woks “to free every innocent person in Ohio who has been convicted of a crime they didn't commit,” according to information on the University of Cincinnati College of Law web page. Since its inception in 2003, OIP’s work has led to the release of 33 wrongfully convicted Ohioans, who collectively served nearly 650 years behind bars.

The program at CNE had three sessions, to reduce the size of crowds in the high school gymnasium. Reed spoke briefly, showed a video detailing the successes of the Ohio Innocence Project over the years, and then introduced Charles Jackson, one of the men who was freed by the Ohio Innocence Project after being wrongly accused and convicted of murder.

Reed has seen the justice system from various perspectives. He worked at the Ohio Supreme Court for 12 ½ years, including for the chief justice; for a federal judge in Boston; in private practice, and for a prosecutor in victim’s services and domestic violence cases. His message for CNE students was simple.

“The understanding that innocent people can be convicted. We get it right most times in the criminal justice system, and statistically like a 95 percent accuracy rate for students seems like a great thing, if we could all get 95 percent on our exams we’d be great,” Reed said. “But what happens is we ignore the human life that’s in that other 5 percent, whether it’s someone who could be executed or spend 30, 40, 50 years in prison.

“There’s all kinds of tragedy that goes with that and all of those people have parents and siblings and kids, so it impacts not only the individual, but also their family and their community, it’s society, and it’s not just for anybody, victims don’t get justice, people who should be punished don’t get punished and innocent people do. So we want students just to have the understanding of applying what they’re learning to their overall experience and to focus on their education so they realize how important it is to know your rights, and to be able to advocate for somebody else if their rights were violated.”

Senior Sarah Padilla heard that message clearly. She was only two chapters into the book (students can read at their own pace, though Wayne said reading times are built into curricula, and many students have told her they read at home), but already had definite opinions.

“It’s written in … a relevant way to today even though it’s based in the ‘80s, so I think that’s cool, because it shows that it’s still happening now,” Padilla said. “And I like the fact that … I think it can be turned into a political book, and even though we’re in high school, I think a lot of people here have their own political opinions, but I think it kind of makes us all like group together, because, everyone no matter what you believe can agree that the justice system is kind of messed up in America.”

She also said “it’s a good way to end the year that was all messed up and have us kind of connect at the end.”

Neither Padilla nor Wayne was familiar with the Ohio Innocence Project before they began reading the book. Padilla having speakers from the group come to the school “makes it more real to us.”

Describing Jackson as “one of the best people he’s ever met,” Reed said his experience with the Ohio innocence Project has changed him.

“If I spent 27 years of my life in prison, I couldn’t be there for my parents’ funerals or my nieces’ and nephews’ births, I don’t know that I could be as forgiving as these people are, so I think the biggest thing that I take away from them is not just to be a better lawyer, but to be a better human being,” he said. “They’re just such a testament to having hope and doing the right thing regardless of what’s been done to you, to try to make a positive difference even if people can’t understand why you want to, and it’s really sincere in all of them.”

The video presented to CNE students can be viewed at https://bit.ly/3ttTjrM.