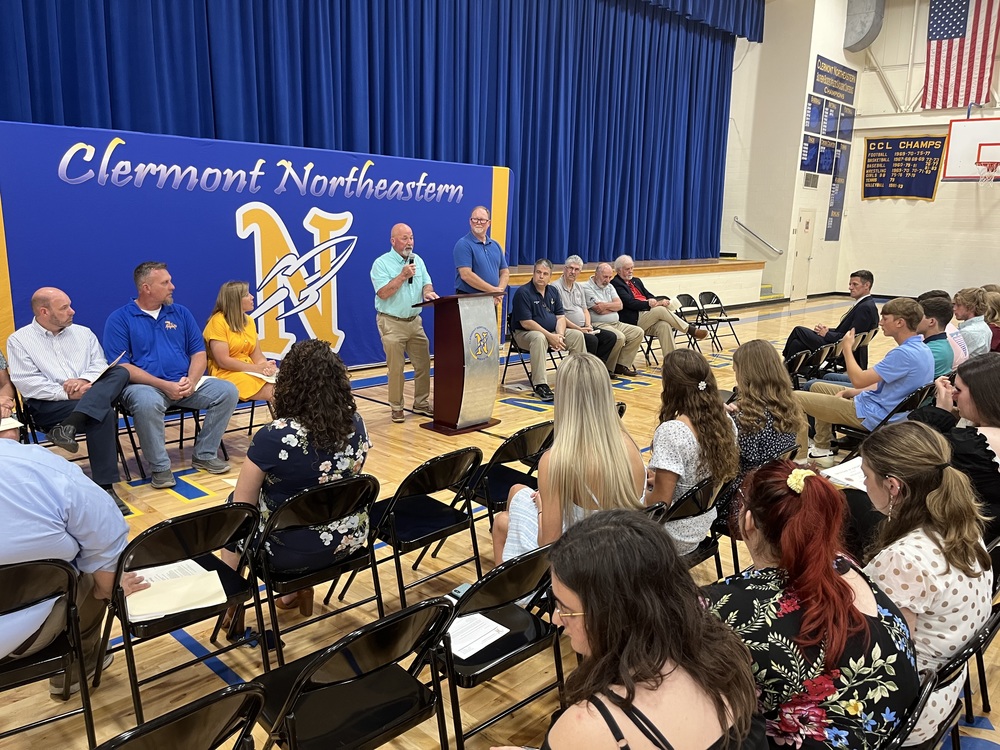 The dollar amounts ranged from $300 to $5,000, and totaled $43,525 – an almost insignificant percentage of the more than $1 million in scholarships earned by Clermont Northeastern High School’s Class of 2022 – but every dollar has a story, and is extremely important to the CNE seniors recognized May 20 during the annual Senior Awards Night.

High School Principal T.J. Glassmeyer welcomed the seniors, friends and family, and acknowledged the various scholarship presenters, and told a story underlying the significance of the accomplishments to be recognized.

He and Assistant Principal Scott Houp were interviewing a candidate for an open position at the high school, Glassmeyer said, when the person asked them about CNE – specifically, why they like working there.

“The support our community bestows upon our seniors is second to none,” Glassmeyer said. “We have phenomenal students who work incredibly hard, who care about each other, this school and this community, who live by The Rocket Way, who are respectful, responsible, dedicated.

“It has been a blessing and an honor to watch these young men and women mature over the last four years. I cannot wait to see what the future holds, whether they decide to continue their education, enlist in the military or enter the workforce. I know they are going to be incredibly successful, and their futures and options incredibly bright.”

The relationship between community and school, between faculty and students, was a theme throughout the evening.

Nolan Reed earned three $1,000 scholarships, the McCollum Scholarship, from CNE Alumni and the Northeastern Lions Club. The senior plans to study music education at Ohio university, where he has already been accepted as a member of the Marching 110. OU is the alma mater of CNE band director Chris Moore, and Reed hopes to follow a similar path.

The McCollum Scholarship was named for John McCollum, who died in February at the age of 103. He was a World War II veteran, worked for Ford Motor Co. for 32 years, was a member of American Legion Post 179 in Blanchester, an 80-year member of the Edenton Lodge 332 F&AM, a lifetime member of the 32nd Degree Scottish Rite, member of the Royal Arch in Blanchester, Ohio, and the Lebanon Commandery.

He and his wife, Nancy, did not have children, but decided to set up scholarships.

“I had never realized that Mr. McCollum had done so much for our community. And I mean, even listing all the lodges, all of the fraternal posts that he put up … I strive to be somebody who can do as much as he did. I mean, that's amazing,” Reed said.

“Honestly, I don't know if I'll ever be in a school again that is this tight-knit and it's such a tight community where I can just go and it's, I mean, it feels weird to say this, but it's almost like everybody's a friend,” he said. “You know, you see the same faces that you have these kindergarten and there are pros and cons to every situation like that. But there are more pros than cons, honestly. I mean, it's such a cliche saying, but it's really just like a family here. It’s like a go to anybody and ask for anything.”

“I’d say the athletic boosters one was a big one for me, just because I've always played sports throughout high school,” Yeager said. He was a four-year member of the baseball, basketball and soccer teams, played golf for two years and ran cross country one year.

“The people, my friends and the environment that I got to go through every day. It was just a good time. It was great to get to learn and also have fun at school,” he said when asked what he would most remember about high school.

Hannah Creager had her name called seven times, collecting $13,300 in scholarships, including one for $5,000 from the Clermont County Bar Association and a $2,000 award from Mercy Health Clermont Physicians. She will also attend Christ College of Nursing Sciences.

“I think that Mercy Health Physicians was the most significant to me. I'm trying to pursue a career in the medical field and it's really going to help me make it.

“I'll just remember all the memories, my friends, my teachers, just all the opportunities the school gave me,” Creager said.

Steve Vastine hopes the newest CNE alumni carry that feeling forward, and continue to stay involved. The 1971 CNE graduate is a past president of the alumni association and represented the group at the awards presentation. CNE Alumni presented $10,500 in scholarships this year, to seven students. That was almost three times the dollar amount awarded last year, when the group gave four $1,000 scholarships.

The Alumni Association changed its procedures this year. Each of the 13 applicants was scored based on presentations, academic credentials, interviews and an essay. Committee members did not know applicants’ names.

“We just broke down the scores and we knew about what kind of monies we were going to give and we had unfortunately had to stop at seven, but all 13 kids we could have given money to as far as I was concerned,” Vastine said.

Vastine said the number of active alumni has more than doubled (from six to 14 or 18) in recent years, and the scholarship awards help bring attention to the group.