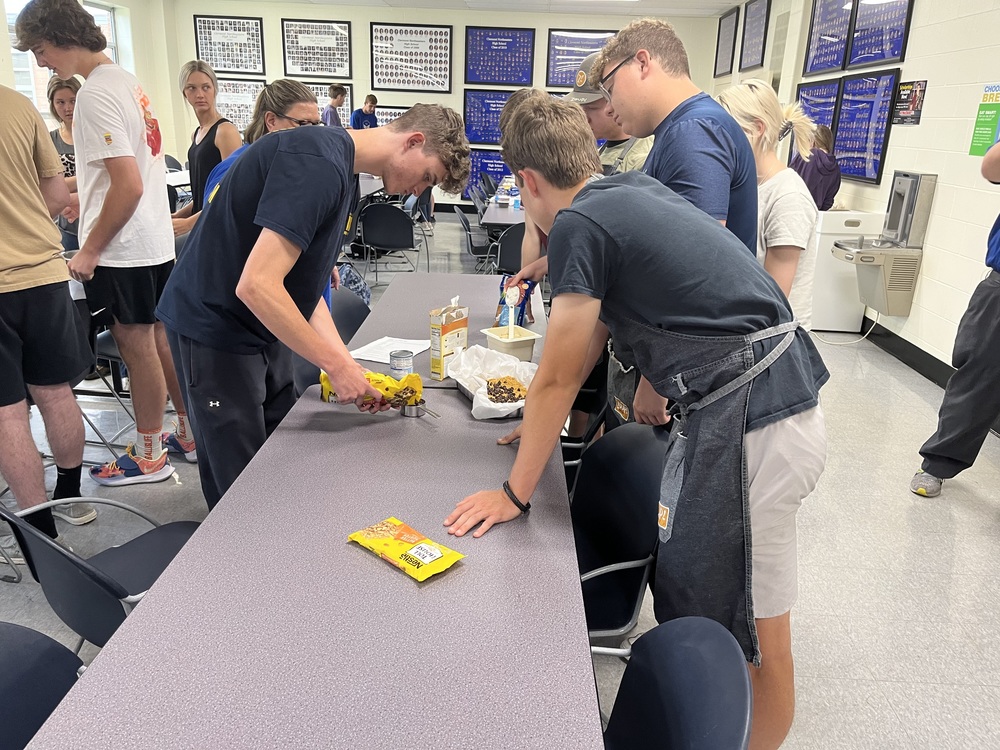 How does an event, seared into the memory and consciousness of those who lived through it, watched it, remember it, become relevant to the next generation, for whom it is little more than an entry in a history book?

Clermont Northeastern High School faculty and staff tried to answer that question by focusing on another, more pointed one: “What would you do with the last hour of your life?”

That is the theme behind “The Red Bandanna” by Tom Rinaldi. The book tells the life story of Welles Crowther, who led as many as 20 people to safety out of the South Tower of the World Trade Center on Sept. 11, 2001. He eventually was killed when the tower collapsed. Crowther was 24 – only a few years older than the CNE students who read Rinaldi’s story and then participated in an “Impact Day” May 16 at the school.

Crowther carried a trademark red bandanna, given to him by his father when Crowther was 6 years old.

Students and faculty at CNE read the book and then organized “Impact Day” - a day of service. Eight groups worked on and around the campus on Newtonsville-Hutchinson Road, while a ninth visited the Clermont County Animal Shelter.

Teachers Shelly Hilderbrand and Megan Yeager led activities in the cafeteria. In “Charity in the Café,” Students repurposed old and misprinted T-shirts into reusable laundry and shopping bags, cleaned and removed labels from prescription bottles, and created messages to be sent to nursing home residents. Closer to the kitchen, a “Baking for Heroes” group was making treats that would be delivered to local fire and police departments, as

well as other CNE schools.

“Some of these kids have never baked before and so that's been fun to help them and teach them how to do that. We're having a good time,” Hilderbrand said. She, and other staff members, noted that none of the students were alive on 9-11. The book, as well as a documentary students watched that morning, made the event, and Crowther, more real.

“I think the documentary this morning really helps kind of bring it around because when they watched that, I think it kind of gave them that emotional attachment to making who Welles was in the book, a real person,” Hilderbrand said. She was in her planning time in 2001, watching the towers fall.

“So it's a totally different emotional connection for me than for these kids,” she said. “They asked … how I felt during that time and they wanted to know, of course they want to know how we feel because they have that connection to us.”

Band director Chris Moore was in college on 9-11. He led a group that picked up garbage along the campuses.

“I think this Impact Day is something different that we could grow and continue to do,” Moore said. “I was concerned that (the book) was going to be too intense maybe, but I think it's relatable to a lot of our kids who are experiencing opening them up to service opportunities beyond just this as a requirement of something to do.”

Junior Dakota Hunt first remembers learning about 9-11 when he was in fourth-grade in Batavia. He was helping create a mural inside the high school’s new Heather Rhoades Commons area, across from the gymnasium.

“I didn't understand what it was until I went home and I asked my parents, and my stepdad and my mom sat me down and told me exactly what went on. And he told me how bad of a catastrophe it was. And that's when I learned, so I know based off what my family has went through,” Hunt said.

The mural features images from around Greater Cincinnati, including the Great American Tower, Fiona, a version of CNE’s rocket logo, and, near the bottom, a Bengal tiger wearing a red bandanna.

Teacher Ashley Salzl supervised work on the mural. She said she had not been aware of Crowther’s story before reading the book.

“I knew there were people who saved people on 9-11, but I didn't realize that wasn't such a big impact on everybody around them. It was a really good book and I'm really glad we got to read it,” Salzl said. “We wanted to kind of pay tribute to that a little bit so we put a red bandana on our Bengal tiger. And we're going put (military) planes in the background to kind of give more tribute to vets.”

Jill Stegemann’s “Honor Flight – Dedicated to Veterans” project group was forced to improvise. The students were making cards, coloring sheets, crossword puzzle clues and T-shirt to share with veterans who participate in the Honor Flight program, but their original card order did not arrive on time. Teacher Rhonda Campbell had some extra cards she gave them.

An “avid reader,” Stegemann volunteered to do an audio reading of parts of the book.

“We watched that documentary this morning and I stopped it and told my kids I remember where we were, we were here, we watched that take place. We all stopped teaching and at that time we have teachers in the room and we sat down and watched the ‘Today’ show as we watched it unfold,” Stegemann said.

9-11 is perhaps more personal to teacher Steve Thompson than to most other CNE faculty. He enrolled in the military because of 9-11, earning a Purple heart during service in Iraq. An uncle of one of Thompson’s friends was in the South Tower – he was a captain on Rescue 5 out of Staten Island. Thompson and science teacher Scott Wells led students who were doing yard work at houses across the street from the high school.

“We do something for Sept. 11 every year anyway, and I've actually told the story of the guy in the red bandanna,” Thompson said. “I asked the kids what do you do with the last hour of your life and if you know that you're not going to make it out, right, and seeing what he did, and using his impact that the 12, 13 lives that he saved. This Impact Day was something to kind of reflect. I mean, pulling weeds seems meaningless and kind of stuff like that, but it's just something that is there a little bit.”

Wells climbed a ladder to the roof of one of the homes and blew leaves out of the gutter and off of the shingles. The book left an impression on him

“One of the things I like is learning what kind of young man he was … and when really push came to shove, he sacrificed his life for other people, but I thought the big portion of the book, the beginning part, was finding out why he was like that and you could see and all the little things that he did. So that was one of the big things about doing this was, you know, we're not talking about laying down your life. But we are talking about the little things that service-minded person can help out.”

“It really shows you that you don't have to have such a big title to be important,” Hunt said.

These were the nine activities in which Clermont Northeastern High School students participated on Impact Day:

Clean up common area between science and math wings.

Reading to some of the students at the elementary school.

Students painted a mural in The Heather Rhoades Commons at the high school.

Students baked and prepare a variety of cookies and then packaged them to be delivered to local firehouses.

Students watched videos about the program and veterans who have taken the flights, and learn about the local Honor Flight Tri-State organization, and made cards to send to local veterans participating. In addition, each student created a "make and take" patriotic craft item to take home!

Doing minor landscaping and yard cleanup for community members in need of assistance.

Charity in the Café

Projects included repurposing misprinted t-shirts into reusable shopping/laundry bags, pill bottle cleaning to remove labels from prescription bottle for relief for disaster victims, and creating cheery messages in cards to be sent to nursing homes, and appreciation letters to veterans.

Students toured the building, visited the cat room and made enrichment toys for the animals!