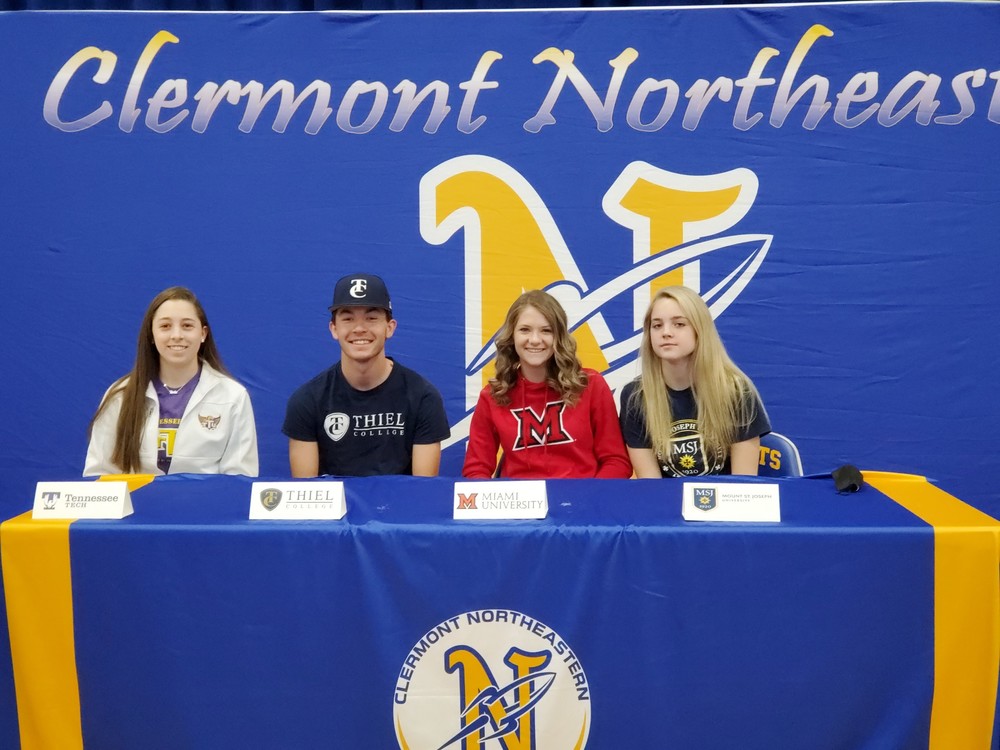 Their accomplishments, on the fields, courses and courts, are for the record books. What four Clermont Northeastern High School senior student-athletes will remember most, though, are the friendships they made and the support they received through their careers.

The four – Lexi Eyre, Promise Shircliff, Hailey Stegemann and Landon Williams – signed college letters-of-intent in ceremonies in the high school gymnasium May 14. They will venture east, to Greenville, Pennsylvania; south, to Cookville, Tennessee; north, to Hamilton, and west, to Delhi Township. Their roots will be at CNE.

Here is a look at each of the four Rockets:

A passion to desire and compete, and a dedication to the CNE program, are Eyre’s legacy, according to varsity coach Emma Keough.

“Lexi is an incredible athlete. She has the unique ability to play any position and to be successful,” Keough said. “Lexi is extremely coachable and that makes her a pleasure to work with. Her level of confidence has grown so much since I began working with her on varsity during her sophomore season. Lexi was a quiet leader, leading by example. She was always the one to go 100 percent in a drill and to give full effort whether we were doing her favorite or least favorite drill.”

Eyre played three varsity seasons, and ranked fourth in the Southern Buckeye Athletic and Academic Conference in kills n 2020, with 317. She had a season-high 27 against Cincinnati Trailblazers Sept. 15 and 21 against Cincinnati Country Day Oct. 14. Eyre was named first-team All-SBAAC National Division in 2020 and second-team in 2019.

She credited Keough and assistant coach Megan Goldfuss with helping her improve as a player.

The final season for Eyre, as for all high school student-athletes, was in doubt for much of the summer because of the pandemic.

“It was scary, because I was really looking forward to it, and when we made it through, I was happy about that. We did pretty good. It was really fun,” Eyre said.

“I just like that it is close to home and I felt very comfortable and everything,” Eyre said about her decision to attend Mount St. Joseph, where she plans to study pre-med with a career goal of being a veterinarian.

“I know she will be a fierce competitor at the next level and I cannot wait to watch her in action. CNE was so very lucky to have Lexi Eyre as a student-athlete for the past four years,” Keough said.

“Just being with all my friends and the relationships with them and a strong bond,” Eyre said.

Shircliff plans to play both sports at Miami-Hamilton, and her high school coaches see success for her.

“The best way to describe Promise is tenacious. She was like a dog on a bone when she was on defense,” basketball coach Doug Portmann said. “We would put her on the opposing team’s best player and tell her to shut her down and she almost always did. She was one of the top rebounders in the league as a 5-foor-5-inch guard. She led us in scoring, assists, and steals also. She is an amazing athlete.”

“Promise is an athlete who gives all and is very humble about her accomplishments. She is the hardest working on the team and the hardest on herself,” Hoerth said. “This young lady lost one of her biggest coaches and fans when her dad passed away July 19, 2019. She strives to do her best no matter what and has made many game saving plays that not many athletes will ever achieve. Her faith in God is graceful and unwavering.

“What will I remember - her smile, her drive, her toughness mentally and physically and her kindness. This young lady is simply a treasure. She will go on to do amazing things and I absolutely adore her,” Hoerth said.

“I felt like it was a good fit,” Shircliff said of Miami-Hamilton. “It was a small community and I’m going to get to continue to play softball and basketball.”

“I will remember the community most. All of the kids, they were all really close and tight-knit, so I love how close we all were and the teachers were very supportive of everything,” she said. “Just the support that the whole school gives and everything. School and classes, everyone was great.”

Stegemann will be the first golfer in CNE history – male or female – to play Division I school, and the first girls golfer from the SBAAC to do so.

Stegemann is the first CNE golfer to qualify for district three times, and a three-time All-SBAAC first-team all-star.

Twice in 2020 she broke the school record for nine-hole score, first with a 37 and then with a 35. Her high school career concluded with a 10th-place finish at the Division II district tournament at PipeStone Golf Club in Miamisburg, where she shot an 86 to tie for 10th – three strokes shy of a state tournament berth.

I loved the campus. It was pretty much everything I wanted in a college,” she said. “I was able to visit, but I was not able to meet my coach or talk with him. I still have not met him. Hopefully I’ll be able to meet him before I move in, but it definitely made it a little bit harder.”

“Probably the first time I broke the nine-hole school record. It was one thing I really wanted to do. I did it at Deer Track. That one stands out for sure,” she said. “Definitely the memories I made with my friends, in and out of sports. A lot of them didn’t happen with sports, but just being able to be with all of these people, and I have friends that probably I’ll have for a lifetime.”

“He isn’t a guy that watches others do things. He will go out and get it done himself. Whether it is taking the extra swings, coming early, staying later, or even just being the guy who helps clean up the field,” Sanders said. “He works hard and appreciates all he’s accomplished and been given. He would have started three straight years at what I look as being the most important position on the field (catcher) if it hadn’t been for Covid. That’s something to be proud of!

“Landon takes criticism without getting down about it. He learns from mistakes. Rarely makes them twice. A very smart and dedicated kid.”

Williams was a multi-sport athlete, also competing in bowling, golf and soccer at CNE.

Thiel is in Greenville, Pennsylvania. Williams visited the campus in September and said “it just felt right,” comparing Greenville to Owensville. He plans to major in exercise science with the goal of becoming an athletic trainer.

“It means a lot. Ever since I was a little kid, I started playing baseball at 3-years-old, I’ve always wanted to play on a high level, obviously the dream as a kid was to play in college. It means a lot to my family too, because they made a lot of sacrifices to allow me to play, not only for high school, but during the summer, playing all over the place, families sacrificing their jobs and stuff, for me to play baseball.”

What he will remember “The friends I made. Some kids I played with I had never talked to before and then we started being friends and they’re just some of the best friends I’ll ever have. I’ve gotten some good friends over the years of the high school and they’ve helped me a lot with school, not just going through school, but having fun on the field and stuff, so I couldn’t do it with